Disclaimer: I received a BOCO Gear 360° Visor  as part of being a BibRave Pro. Learn more about becoming a BibRave Pro (ambassador) and check out BibRave.com to review, find, and write race reviews.


During the warmer months, I will often turn to a couple of old visors I have for running.  They aren't high quality gear. Instead, they are the type of visor you pick up when you travel and visit places like Cape Cod or the zoo.  That said, there are some great gear companies out there that do make running specific visors, including BOCO Gear out of Boulder, Colorado.

Recently BibRave Pros got to try out BOCO Gear by either selecting a hat or visor.  I opted for the visor as I really do prefer this since it allows for more airflow on your head while still reducing sun glare without the need for sunglasses.  The BOCO Gear 360° Visor is very comfortable to wear.  It has no straps that you have to adjust, but is one size fits all with a "soft brushed elastic back for comfort and fit."  That means ease of use and no hair getting stuck in velcro.  The front inside portion of the hat has an internal wicking sweatband for those hot days and is one again, very soft and comfortable.

The bill of the visor is curved and has a black underside to reduce glare.  They really have thought out every component for such a simple but elegant and important little piece of gear for warm weather running.  I have really enjoyed running in the BOCO Gear BibRave version of the 360° Visor.  Now, it is also Moose Approved!!!  Enjoy!

Chchch...chia!!!  If you lived through the 1980's, you know the theme song and the commerical, the wacky idea of owning your own chia pet...okay, yeah...it was kind of weird!!!  But chia as superfood, something that's been steadily growing the last several years even in the mainstream, is a much better idea.


Health Warrior Chia bars come in a variety of flavors and I recently had the opportunity to try two of those, Apple Cinnamon and Dark Chocolate.  For those of you who might have or chose to restrict certain elements in your diet, Health Warrior Chia Bars are gluten free, dairy free, soy free, and vegan.


Health Warrior Chia Bars are also...(drum roll please)...HEALTHY!!!  Ok, so I've stated the obvious.  But, according to their own website, chia seeds, the number one ingredient in the bars are:

"Full of nutrients you need like omega-3s and fiber. Ounce for ounce chia has more protein than an egg, more omega 3s than salmon, more fiber than flax, more calcium than milk, and more magnesium than broccoli."


In particular, the box my bars came in notes: "1 ounce of chia contains as much omega-3 as 4 filets of salmon, as much protein as 1.2 eggs, and as much fiber as 1.2 ounces of flax seed."  (Note, they don't mention the magnesium, but both bars I tried had 8% of the daily requirements.)


So what about the actual product experience?  While I was surprised at first with how small the bars are, after initially eating two as a snack at 100 calories each, I felt satisfied and energized.  It was then that I remembered that chia seeds absorb water to make you feel more full, up to 10x their weight according to Health Warrior.  Their small size also allows for ease of transport whether at work, school, or play, and also allows them to be a very quick snack.

Taste?  The dark chocolate was very good as expected, but what surprised me was the apple cinnamon.  Often apple cinnamon products don't always taste good or settle well for me because the flavor just gets overpowering and I end up with indigestion.  However, not only do both these flavors taste great, they have settled well for me each time I've eaten them, which is just as important to me in a sports bar.

The only thing to note, which is true of any product with chia, is that sometimes the seeds will seek to hide in your teeth and you may have to play with them to get them out (or floss).  If you are at work, this is just a heads up as it is really easy to not realize you have them stuck in your teeth as you talk with fellow employees or customers!!!


Finally, Health Warrior also recently came up with a humorous marathon training coloring book.  While I haven't had the time to actually color in it, (I'm busy building a special project for a Christmas present that takes much of my free time when not at work, running, or spending time with my wife and 6 kids), I did flip through it and look forward to coloring in it alongside my younger children when they break out their own coloring books during Christmas break, which I am sure they will.  You can get our own free coloring book at http://healthwarrior.link/colorbookbr.

In conclusion, these are great bars as a pre or post run snack, as well as any other time, and the coloring book is a fun addition!!!  Enjoy! 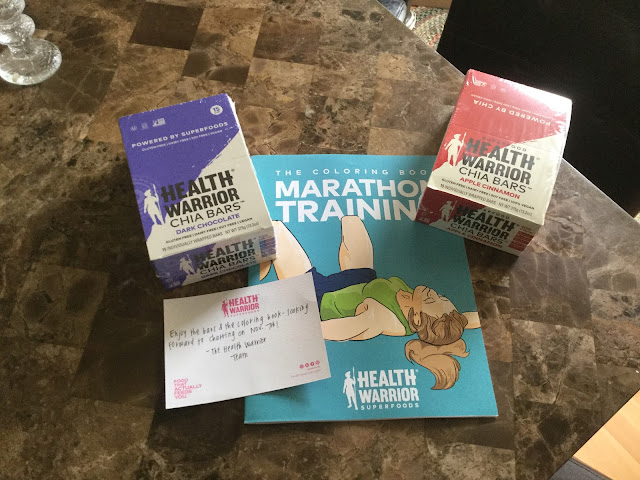 Disclaimer: I received a BUFF® Arrowhead ThermoNet Hat and BUFF® as part of being a BibRave Pro. Learn more about becoming a BibRave Pro (ambassador) and check out BibRave.com to review, find, and write race reviews.


Just in time for late Fall and Winter, BUFF® strikes again with their ThermoNet line of products that are perfect for the time of the year we are in now...late Fall and early winter.  I got to try out to well designed pieces of gear this time, a hat and a BUFF®.  Both are lightweight, with 70% recycled material that is fast drying and made of soft Primaloft yarn.


When I first received them this Fall, we were still going through some warm days, so the first thing I noticed was that these are too much on a warm day in the 50's and higher.

But this weekend, as I raced a 10K on the trails in the 40's, my ThermoNet Hat was perfect.  Nice and snug, warm, lightweight, and sporty!!!

The information of the ThermoNet line is that it is 4X warmer than Microfiber.  I would guess part of that is that the Primaloft yarn seems to me a tighter weave such that less cold air is getting in even while the BUFF® or hat is managing the sweat moisture against your head or neck.  The other part is that while wicking away the moisture, the fabric traps the heat inside to keep you warm.  Keep the cold air out, keep the hot air in, minus the moisture. Sounds like a plan to me.  The weather condition rating for these is cool on a scale of cold-cool-warm-hot.  Personally, I would probably wear these in conditions 45F or less.

Right now if you go to www.buffusa.com you can save 20% off your entire order when you purchase at least 1 ThermoNet product and use code BIBRAVETHERMONET20.  This code expires 11/21/17. 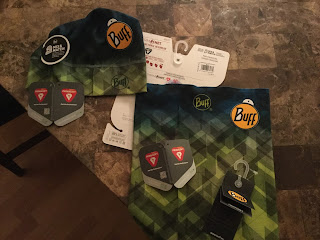 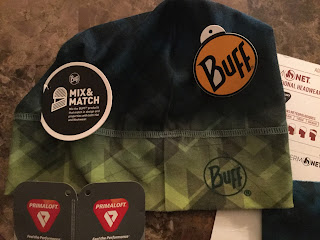 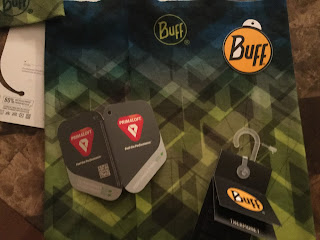