The inaugural Frost Town Trail Festival 10K & 25K took place on June 2, at the Cummings Nature Center located outside of Naples, NY.  If you don't know this area of Western New York State, it is populated with several lakes, (aka the Finger Lakes), as well as lots of several large hills and valleys.  One of my worst races ever occurred in this region about 2 years ago, (Ontario Trail Summit Half Marathon), so coming back to this region, as well as racing the longest race I have run in since 2015, had me a bit concerned.

I realized during this stretch that the weather from the previous night had left the woods in an interesting weather condition, the air was coolish but damp, making for a kind of tropical rain forest feel.  It wasn't too bad, but I also noticed that these logging roads...well...they hadn't really been used...like for quite a while!!!  Though you could definitely follow the trail, even these were a bit rough.  We ascended towards the top of this climb, not quite topping out before heading back down.  Trails here were not bad, but certainly not buttery smooth.  Remember, lots of logging roads are kind of like overgrown Jeep trails.

The next section of trail was through the Cummings Nature Center trails before splitting off at one point to begin the descent towards the 8.4 mile aid station.  Once the trails split off from the 10K, they definitely started to seem more remote and as the descent started, I actually almost lost the trail at one point.  The trail started descending the 1200 ft or so and thus began the toughest section of the race.

This long section seemed to be carved out of the forest as you cut down the side of the hill.  That's not entirely true...again, some of this seemed to follow along older logging roads and/or a thin stream/wet drainage type area.  Speed for me was tough to gain here as the footing was often muddy, unstable, rocky, or dense.  Mostly it was the mud.  At one point I as I crossed a gash in the trail leading downwards, which I thought was the trail as it was wide like a stream, I almost missed the flag on the other side of the bank leading a different direction.  Towards the final half mile or so, a friend of mine, Brooke, passed me seeming to run downhill more like a deer while I had the footing of...well, not a deer!  Finally I came into the 8.4 mile aid station, (with no concern for the cutoff as I was well under it), got some grub and headed straight up.

The ascent I was so worried about...became my redemption...a Godsend!!!  I actually enjoyed it.  It was more stable footing, grassed for a lot of it, and at just the right angle that I could hike it pretty steady.  I passed two people during this long stretch, including Brooke, and gained time on both.  I know it might sound crazy, but I think the ascent was my favorite part of the race.  I actually felt good on it.

The very top wove around a bit and then broke out of the woods for a short span giving a nice view of the neighboring valley and hill as seen in this picture: 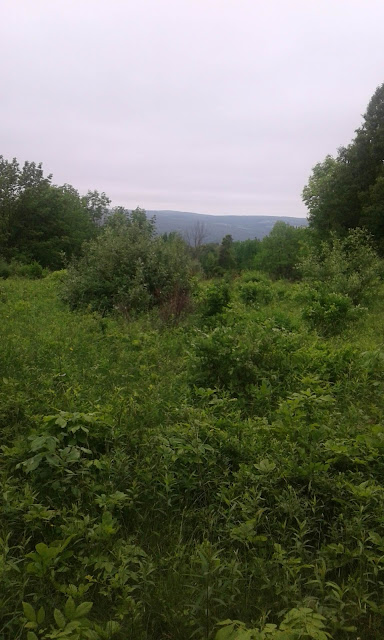 After descending a little bit more, I arrived at the last aid station to hear that the finish was like less than 2 miles away.  I thought, "That can't be right."  So I asked again.  They seemed pretty confident, but I've raced long enough to know that a lot of race volunteers say things like this and actually have no clue...or just say things like it to make racers feel better!  But, I also know that they said it would be .75 miles short.  So, I concluded, that if the course distance ended up being the full 25K, I'd have like 3.5 miles left, if the RD was right, I had like 2.75 miles left, and if the volunteers was right, I had less than 2.  That made for an interesting finishing couple of miles as I tried to figure out just where I was.  As I started weaving my way back through the nature center trails, I started wondering even more...and then I finally saw these:

I stopped to take a couple of pics as I came to this awesome stretch of trail, and then as I ran through it, I started hearing music and seeing people eating...I was almost done!!!

Then I rounded a corner, ran a bit more, popped through the woods, and crossed the line.  Time was okay for the course, though nothing to write home about, (I was 42nd out of 52), course was about 22K in length, but within moments, I had a full pilsner glass of local craft brew.  In fact, our race registration included entry into the brew fest which included around 5 breweries and a local kombucha brewing company as well.  Food was from a well known local restaurant and their chili rocked!